Big Data versus a Rare Disease

Shannon is my third child. She turned 16 in August. She’s beautiful and has the attitude of a 16-year-old. However, although she understands most of what we say, she can’t communicate verbally. And she has seizures, doesn’t sleep well, has a lot of reflux, and her limbs swell. 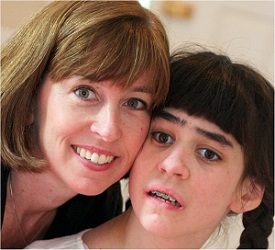 Megan O’Boyle and her daughter, Shannon, who has Phelan-McDermid syndrome. (Courtesy of Megan O'Boyle)

Shannon has a rare disease called Phelan-McDermid syndrome. It is a genetic disease typically caused by a loss of the bottom segment of chromosome 22. The syndrome is a cause of autism, intellectual disabilities, and epilepsy. It’s a complicated syndrome that looks like a lot of other conditions, and it varies. Some kids are medically fragile, whereas others are able to go to school in mainstream classrooms and interact with peers.

Having a child with a rare disease can be isolating. I became active in the Phelan-McDermid Syndrome Foundation and PCORnet to not only connect with other families but to help answer questions like, Why are some kids with Phelan-McDermid syndrome different from others with the same condition? How can we improve the lives of our families, particularly through finding treatments and cures? That’s how I found myself where I am today, and how I’m going to help my daughter.

There are no specific treatments for the syndrome, though you can treat some of the individual symptoms. We have no idea what life with the condition through adulthood looks like. Like many other rare diseases, it has not been adequately studied.

In 2011, I helped to establish and became the principal investigator of the Phelan-McDermid Syndrome International Registry. For years, we worked to identify families and enroll them in the registry, hoping that by centralizing information about families in one place, it would be easier to involve them in research studies. We also worked with families and researchers to develop questionnaires to better characterize our community. But I never could have predicted that this registry would have perfectly set us up to apply for funding from PCORI to do even more.

Today, we are the Phelan-McDermid Syndrome Data Network, one of the 33 PCORnet networks. We build on our existing patient registry by integrating data from questionnaires with information extracted from patient health records. The network has already registered about 600 patients and their families, and we are now closer than ever to having actionable data to not only help researchers help our kids, but lead the research ourselves.

We’re a very rare community. But we also live within the more-common communities of autism or intellectual disability or epilepsy. What we learn could benefit all those other communities. If we were to find a way to improve our children’s attention, for example, or help them learn to communicate better, untold numbers of people could benefit from it.

Examples include a project to help patients with a liver disorder choose between a transplant and more conservative treatment, a comparison of two types of neurosurgery for a debilitating neurological condition, and a comparison of two entry sites for a shunt implanted to relieve pressure on babies’ brains from hydrocephalus.

For more information, see our fact sheet and a list of our rare disease CER projects.

An Accidental Entry into Research

I actually got involved in research by accident. I had been concerned with the day-to-day health of my daughter, and when I heard the word research, I would think it didn’t apply to us.

I joined the committee, and the foundation launched our registry of patients the next year. What I didn’t expect was the appreciation I gained for research. I saw that research is a two-way street: not only do the families contribute to research but participating in research empowers and educates families, and helps them be better caregivers. In 2010, another parent active in the Phelan-McDermid Syndrome Foundation contacted me out of the blue and asked me to get involved in the foundation’s research committee. I politely told her I had no interest in research, but she was very tenacious.

We used our growing registry to develop a network and then applied to PCORI for funding. We realized that PCORnet provides an opportunity to help research on Phelan-McDermid syndrome get off the ground.

With so few patients scattered around the world, the likelihood of getting many of them in a clinic for a study is not high. But with a network, the research community can learn a lot more than from studying small groups of children.

I saw that research is a two-way street: not only do the families contribute to research but participating in research empowers and educates families, and helps them be better caregivers

The Power of Data

To build the network, we spent a few years developing infrastructure and collecting information from families’ medical records and answers to questionnaires. But this July, we rolled out our data and tools for the research community at our biennial International Family Conference. Over 30 researchers got a personalized tour, and they were ecstatic. One researcher said, I can do an analysis in 30 seconds that used to take a year.

There are so many new hypotheses that can be tested, and so much researchers can learn from the data, now that the information is more readily accessible. We are specifically interested in understanding groupings of individuals with similar characteristics. Eventually, we hope that we can identify and tailor treatments to these groups, perhaps based on their specific genetic mutations.

I'm very excited to go to the PCORI Annual Meeting, where I’ll be speaking on a panel about bringing together diverse stakeholders. I’m also looking forward to the meeting’s PCORnet workshop, where I expect to learn what other networks are doing and see how it can be adapted for our community.

PCORnet has opened new doors for the foundation and created opportunities for research into Phelan-McDermid syndrome that we only dreamed of previously. We have a lot to teach others, and a lot to learn. We are excited about new partnerships across conditions—including those related to Phelan-McDermid syndrome—and seeing exactly what our exciting network can offer researchers.

​Looking ahead to PCORI’s second Annual Meeting, November 17–19, we asked several of the scheduled presenters to describe their journey into patient-centered outcomes research and discuss what the meeting’s theme, “Changing the Conversation about Health Research,” means to them. Join the conversation by using #PCORI2016 on Twitter.

What a great example of

What a great example of empowerment and the value of PCORnet. Thanks for sharing your journey.