Changing the Course of Research

Why did you plan a school-based project to help low-income children who have autism spectrum disorders or attention-deficit hyperactivity disorder (ADHD)?

Laura Anthony: At Children’s National Health System, we have a very large and busy clinic where we see lots of kids with autism spectrum disorders and ADHD. But we have always worried about the kids we’re not reaching, the kids who can’t make it to the clinic.

Particularly in low-income areas, we need ways for the community to effect change in children where they are. So in our PCORI project, we went out to schools and introduced two interventions for kids with autism spectrum disorders or ADHD. One, called Unstuck and On Target (UOT), teaches children to use specific scripts to help them stay flexible, make better plans, and improve behavior. The other, Contingency Behavioral Management, emphasizes positive rewards for good behavior, including flexibility.

We work in schools in low-income areas. And once teachers and other school staff learn to do the intervention, they can keep doing it year after year, and train others. We are examining whether there are differences in the outcomes of the interventions, including changes in children’s classroom behavior, problem-solving abilities, and academics. 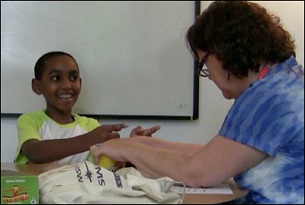 Laura Anthony works with a child enrolled in the PCORI-funded study that she leads with Lauren Kenworthy. (Courtesy of Laura Anthony)

Lauren Kenworthy: I came to this project with a strong interest in the set of brain-based skills called executive functions, which are really important to kids’ outcomes. Executive functions enable us to be efficient and effective in carrying out goal-directed behaviors: Can you reach a goal even if it takes a couple of steps to get there? Kids with autism spectrum disorders and ADHD can have impaired executive function. That may lead to trouble performing academically or getting a job.

How did families affect the study design?

Laura Anthony: There isn’t a part of the project that doesn’t have the touch of parents and other stakeholders. Our advisory board includes not only family members, but school personnel, a developmental pediatrician, and parent advocates from both autism spectrum disorder and ADHD groups.

It's been great to see other researchers say 'PCORI is on to something! Maybe we should engage stakeholders, too!'

Here in Washington, DC, the families we worked with were facing poverty and other challenges, too. At our 21 schools, families spoke 14 different languages in the home. Some of the families were new to America.

Engaging the schools, and the parents once we met them, was pretty easy. They wanted to do the program, and they wanted to help the kids. We had pretty amazing participation in the project. But, in the beginning, we had to work really hard to engage the whole community. It takes a long time to build a reputation as being helpful and accepting. Until you build that reputation at each school in each community, you’re not going to get good participation.

We’d planned on studying equal numbers of kids in year one and year two of the intervention, but it turned out that only about one-third of the number of kids we had planned to include signed up in year one. After we took on those trailblazers, our project’s good reputation spread, so we got much more participation in the second year.

Lauren Kenworthy: There is a snowballing effect. When people learn they can trust us, more people join in.

I had to make a fundamental shift as an investigator to understand that a lot of the folks we want to reach feel marginalized. They didn’t have a reason to trust us at the beginning, and there’s a lot at risk for them to join a study and say, “My child has a diagnosis of autism or ADHD.”

We learned some very concrete things from the families, for instance, texting someone the day of a meeting was just as important for attendance as emailing them the week before. And we learned to communicate on their terms. We started out by picking up the phone and saying, Does your child have autism or ADHD? The fact is that they don’t know me from Adam, but I was starting the conversation with a scary label I want to put on their kids that I say will help them.

Laura Anthony: We very quickly heard families asking, “What is autism or ADHD?” We realized we needed to back way up.

Laura Anthony: We hadn’t planned on doing diagnoses for research purposes, but we had to.

PCORI has effected fundamental change in the society of researchers. As opposed to even five or seven years ago, most people are now talking about inclusion of stakeholders.

Do you think PCORI-funded studies like yours are changing the conversation?

Laura Anthony: At PCORI’s Annual Meeting, a lot of us will be talking about the hard lessons we’ve learned, so that others can get to success more quickly. Other researchers may be in a different part of the country and working with very specific cultural factors, but some of the broader lessons we’ve learned will apply everywhere.

Lauren Kenworthy: We’re learning and sharing lessons with each other, like what we learned from our first wave of participants. It’s been great to see other research funders say, “PCORI is on to something! Maybe we should engage stakeholders, too!”

Laura Anthony: When PCORI launched, it really opened the treatment-research world to new possibilities. PCORI has effected fundamental change in the society of researchers. As opposed to even five or seven years ago, most people are now talking about inclusion of stakeholders. PCORI has had an effect on the culture of research that is really invaluable.

And more and more patient groups are feeling empowered and asking to partner in research. That’s just making our jobs easier and our findings better and more relevant.

Lauren Kenworthy: The snowball effect we’ve seen with participants enrolling in our study, I think you’re also seeing it with researchers and stakeholders. It’s good for everybody.

Looking ahead to PCORI’s second Annual Meeting, November 17–19, we asked several of the scheduled presenters to describe their journey into patient-centered outcomes research and discuss what the meeting’s theme, “Changing the Conversation about Health Research,” means to them. Join the conversation by using #PCORI2016 on Twitter.

The views expressed here are those of the authors and not necessarily those of PCORI.