When she applied for a Eugene Washington PCORI Engagement Award, Sharron Close, PhD, of Atlanta never dreamed it would lead her all the way to the Georgia capitol and Governor Nathan Deal.

Close, a researcher at the Nell Hodgson Woodruff School of Nursing at Emory University, was leading a PCORI-funded project to involve patients and families in setting research agendas that will improve outcomes for patients with a particular sex chromosome abnormality. That abnormality, aneuploidy, occurs when a person has more or fewer than the normal number of male or female chromosomes. Also called X and Y chromosome variations, sex chromosome aneuploidy can cause developmental delays, speech and language delays, learning disabilities, psychiatric problems, and other difficulties.

The Engagement Award quickly yielded what Close calls “unexpected dividends,” including a statewide awareness day and month, a support group, and a clinic to treat patients with the condition.

Sex chromosome aneuploidy occurs when a person has more or fewer than the normal number of X (left) or Y chromosomes. (Getty)

Doctors often miss diagnosing sex chromosome aneuploidy in newborns, although it’s identified when parents opt for prenatal genetic testing. One of the conditions, known as Klinefelter Syndrome, affects about 1 in 400 to 500 male babies.

“Affected individuals are hiding in plain sight,” Close says. “They’re not being picked up and not receiving services that would truly improve their day-to-day lives.” 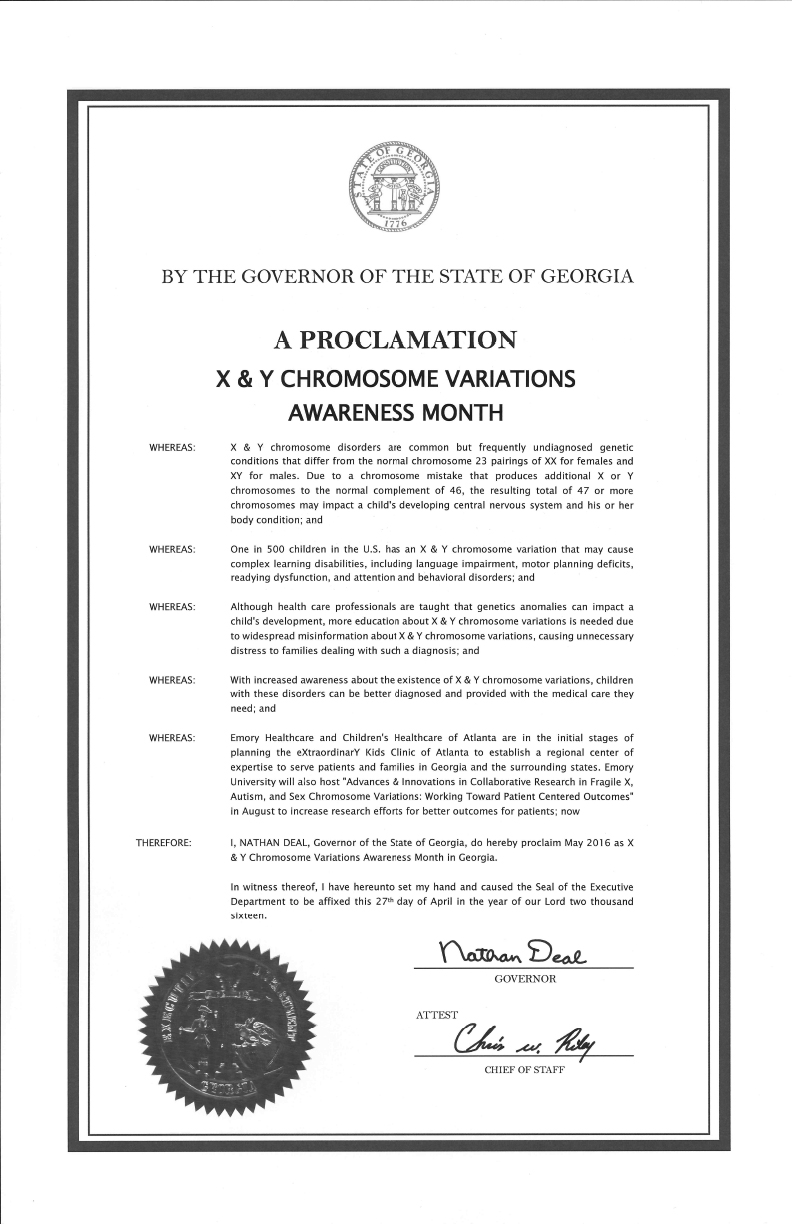 Freelance writer Larry Rakowski, MHA, would know. His son, Jason, struggled to keep up in school. By the time he was in third grade, Jason had caught up academically but his behavior suggested autism. A neuropsychological exam, which includes specific tasks known to be linked to particular brain structures, didn’t yield a diagnosis. In 2010, when Jason was 9, a genetic test provided an answer: XXYY syndrome. The diagnosis didn’t clear up any of Jason’s issues but it provided an explanation—that Jason had double a boy’s usual number of sex chromosomes.

“Had we caught the diagnosis earlier, we would have been so much further ahead of the game,” says Rakowski, a parent partner for the PCORI-funded project. “But it was good to know what else we needed to be concerned about.”

After diagnosis, the Rakowskis paid attention to medical issues that often go along with XXYY syndrome, including lung problems. Jason has been hospitalized multiple times with pneumonia and asthma, both before and after his diagnosis. To address Jason’s autism-like behaviors, the family also added equine therapy to the special education and speech therapy he’d been receiving before the diagnosis.

The years it took to reach a diagnosis, even though Rakowski has a biology degree with a minor in genetics, shows that public knowledge is lacking, he says.

It was an intimate experience, seeing the scientists go from being dug in against a question, to saying, 'We need to study this.'

Learning as a Two-Way Street

Close wanted clinicians and scientists involved in her project to learn as much from those affected with the condition as the other way around. So she began the project by meeting monthly with a group of patients and their families to determine what questions they thought should drive research on sex chromosome aneuploidy.

“I thought I knew what the problems were, but I learned so much simply by listening to parents,” she says. Parents wanted research into behavioral interventions to improve their children’s—and their own—day-to-day lives. Parents also needed to convince school districts to cover special services and help with job placement for older children.

The project held two conferences, introducing clinicians to the patient and family groups. The first conference focused solely on sex chromosome aneuploidy, while the second also addressed other conditions with developmental problems, such as autism spectrum disorder and fragile X syndrome, a genetic condition caused by a mutation on the X chromosome. “We really delved into the details of systemic barriers to care, things like awareness and stigma,” says Rakowski, who traveled with Jason to the conference from his family’s home in Wisconsin.

At first, Close said, when the clinicians listened to patients’ needs, they had a shared and immediate response: It’s too difficult to study behavioral interventions. “But by the time we got the second conference, the scientists were saying, ‘I think we can do this,’” Close says. “It was an intimate experience, seeing the scientists go from being dug in against a question, to saying, ‘We need to study this.’”

A Bounty of Research Topics

Sharron Close, PhD, of Emory University planned to use her Eugene Washington PCORI Engagement Award to develop five research topics. Less than halfway through reviewing transcripts from the project’s meetings, she already has 11. So far, researchers have teamed with patients and families to begin to address four of these topics, and the first has already received funding.

In addition to bringing clinicians together with patients and families, Close’s project increased public awareness of sex chromosome aneuploidy. Close and parent partner Dorothy Boothe contacted state senator Renee Unterman, who also happens to be a nurse. Unterman worked with them to write a resolution, which the state legislature approved, declaring March 11, 2016, as X and Y Chromosome Variations Awareness Day. Close, along with patients and their families, traveled to the state senate on the big day, placing XY-branded buttons, information packets, and mint boxes on each senator’s desk.

“We were all standing in the hallway holding hands because just to be recognized for the first time, it was very powerful for these families,” Close said.

Meanwhile, the project was also gaining credibility at Emory University, Close’s home base. The university agreed to launch an interdisciplinary clinic to treat kids and young adults who have sex chromosome variations, making it one of a handful of such clinics around the country. The eXtraordinarY Kids Clinic in Atlanta opened in February 2016. It provides tailored consultations from specialists in developmental pediatrics, genetic counseling, neuropsychology, endocrinology, and urology.

Another unexpected dividend: The work created by the PCORI grant attracted the attention of a documentary filmmaker, Dianne Steinkraus, whose sister has a sex chromosome aneuploidy known as trisomy X. Now she and Close are producing a full-length film about people with X and Y chromosome variations. They also intend to use footage in teaching modules for people who work in medicine, psychiatry, education, law enforcement, and the judicial system.

The PCORI-funded project also created such a strong bond among patients and their families that some created the AXYS Southeastern Support Group, which meets bi-monthly, offering presentations of interest and support. This regional support group now draws people from North Carolina, South Carolina, Tennessee, Georgia and Florida.

“I had very concrete goals when the project started: I wanted to have five new research questions that were patient-centered,” Close says. She now has more than double that (see box, A Bounty of Research Questions). “All these other unexpected dividends, I never could have imagined.”