Engaging and Serving the Veteran Community

When military members return to civilian life, they sometimes carry undiscussed wounds, ranging from posttraumatic stress disorder (PTSD) to familial interpersonal strain. Frequently, these conditions are known only by veterans and their families. The Eugene Washington PCORI Engagement Awards program seeks to address such health concerns by supporting and engaging people who are affected, encouraging their participation in driving relevant and meaningful research.

Listening to the Community

Dan Van Buskirk returned from military service in the Marine Corps in Vietnam with an intense need to help others. He obtained his degree in sociology and anthropology, became a social worker, and co-founded two nonprofits dedicated to helping veterans recover from war. One day, he learned about an opportunity to improve cancer screening programs for veterans by offering his unique input as a veteran on an Engagement Award project, Working with Veterans to Optimize Cancer Screening Programs.

Project leads Onur Asan, MS, PhD, and Jeffrey Whittle, MD, MPH, from the Medical College of Wisconsin began the project because veterans had an increased risk of lung cancer caused by high smoking rates and exposure to carcinogens in the line of duty. Having experienced the passing of his father—a World War II veteran in the Army’s 101st Airborne—from lung cancer, Van Buskirk felt a need to engage in the project and address the issue.

Whittle came from a family of veterans as well, and knew from personal experience and years of primary care practice in the Department of Veterans Affairs the value of listening to self-identified needs from the community. He saw the power of engaging a spectrum of perspectives. “If you only get the opinion from people who are used to giving the opinions, then you get a different set of viewpoints than you do if you are able to interact in a way that’s genuine and repeated with people who are less talkative,” he said. Putting this belief into practice, he engaged with veterans working on the project, especially those who were initially more reserved in offering feedback.

Van Buskirk provided his perspective as a combat veteran and gave valuable insight into the communication process. “I’ve asked them to really simplify the process and make it very positive,” he said, adding that he was concerned that since “vets who have survived extreme brutality at war have a very strong survival brain,” complex outreach could overwhelm the veteran with fear and anxiety and pose a barrier to them getting screened for cancer.

As of August 2019, PCORI has funded 19 patient-centered comparative effectiveness research studies, an investment of $98 million, that either involve veterans or focus on conditions highly relevant to them. For more information, see our fact sheet, Research Topic page, and a list of our veterans health projects.

Building the Tools for Veteran Engagement

Eight years ago, Cheryl Krause-Parello, MSN, PhD, now a researcher at the Florida Atlantic University, repeatedly watched her husband come home from ground zero, sit down, and pet their dachshund, Samantha. A Marine Corps veteran and first responder on 9/11, he would slowly pet their beloved dog after long days sifting through debris searching for human remains.

For Krause-Parello, watching her husband seemingly “pet his trauma away” was the inception for her first project engaging with veterans, their loved ones, and providers. In that project, she uncovered the role of the human and animal bond in reducing PTSD symptoms and suicide rates in the veteran community. 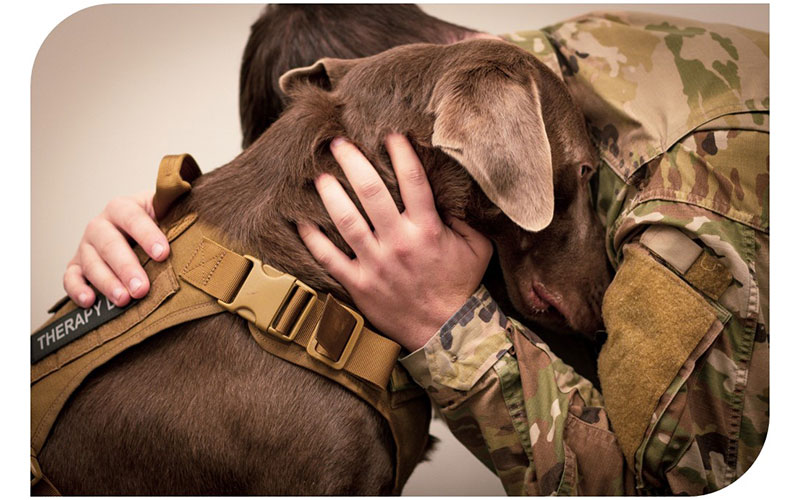 Building on that initiative, she was determined to hear more from veterans about what she could do to help meet their health needs. “If you’re trying to help someone or a community, you need to hear from them first,” she said.

Over the years, she has been awarded multiple PCORI Eugene Washington Engagement Awards to do just that. One of these projects, Operation PCOR: Training Veterans as Partners in PTSD Research, helped address barriers for veterans who wanted to shape approaches to PTSD treatment but didn’t know how to get involved. To address the issue, Krause-Parello and her team created a nationally accessible online training program that introduces veterans to patient centered outcomes research and connected them with researchers.

The veteran-narrated training comprises four 20-minute modules walking viewers through the research process in layman's terms and includes video clips of veterans discussing their experiences as part of a larger effort to ensure the focus was always centered around people. After receiving early feedback from veterans of increased willingness to engage in research, Operation PCOR went nationwide.

Developing a Network of Veteran Spouses

As a veteran spouse, Elisa Borah, PhD, has long had a passion for veteran-centered work. While directing PTSD research programs at Fort Hood in Texas, she noticed studies weren’t involving spouses or families in the treatment approach, yet often it was a spouse who called in to the clinic seeking care for his or her loved one.

To address this, she applied for and received a PCORI Engagement Award, VSN: A Network of Veteran Spouses Engaged in Research, to build the Veteran Spouse Network (VSN) across Texas. The aim was to foster collaboration among veteran spouses, care providers, and researchers to improve research efforts addressing veteran families’ health needs. “By asking veteran spouses about their priorities, we were able to identify, develop, and test new programs that help the family cope and better support the veteran or servicemember, which leads to the entire family receiving the support they need,” she said.

The spouse brings another point of view and even more insight into what’s going on sometimes if the veteran isn’t able to vocalize or fully see what’s happening to them or the impact it has on their families.

She and her team recruited veteran spouses interested in informing relevant research and hosted webinars through the VSN webpage to train spouses on research methods and becoming patient partners in research. VSN members also spoke at conferences to connect with other stakeholders, where they received glowing feedback from attendees on the unique, often unheard, stories and experiences described. “The spouse brings another point of view and even more insight into what’s going on sometimes if the veteran isn’t able to vocalize or fully see what’s happening to them or the impact it has on their families,” Borah said.

In one activity, VSN members used a whiteboard to describe what it meant to be a spouse of a veteran and Borah’s team brought in a photobooth to capture the wide array of responses. The VSN has fostered communities in person and online, helping spouses realize and vocalize their unique perspective on the health of their family.

PCORI stakeholders listened to veterans and their families, built the tools to support their engagement, and developed a network to sustain this support.

However, furthering this work requires continued efforts. For instance, researchers seeking veteran involvement can contact Krause-Parello to be added to the ‘VetResearchHub’ database, and all are encouraged to visit the above links to learn more.

Through patient-centered engagement, the health needs of this honorable community can continue to be met.

Thanks for reading, Michelle!