PCORI is committed to funding patient-centered comparative clinical effective research (CER) studies that engage patients, caregivers, clinicians, and other end users of healthcare information as partners throughout the entire research process—from topic generation to dissemination. This research model, which focuses on research questions and outcomes determined by patients, is a major shift from the traditional model. Typically, scientists have alone determined research topics and how the research will be conducted. Given this shifting landscape to a more collaborative research model, PCORI recognizes that both researchers and the non-research community, which include patients, could greatly benefit from a jumpstart that provides support and guidance on partnership development and capacity building.

So we developed PCORI’s Pipeline to Proposal initiative, which invests in individuals and small groups that are not usually involved in traditional research activities but propose to build partnerships around a specific healthcare topic. The idea is to facilitate and nurture new partnerships that will ultimately result in applications for patient-centered CER studies. Our longer-term goal is to build a national community of patients, other stakeholders, and researchers who have the expertise and passion to participate in patient-centered outcomes research.

PCORI is interested in sharing new practices for forming partnerships and other pre-research engagement strategies of researchers, patients, and other stakeholders. We view our Pipeline to Proposal award recipients as part of a laboratory for identifying best practices in these areas, and we spend a lot of time documenting their activities.

Getting the initiative off the ground

In December 2013, we funded 30 individuals and groups in the US western states as our first Tier I Pipeline to Proposal awardees. In March 2015, we selected 27 of these awardees to receive Tier II support to further develop their projects by increasing their research capacity, creating new partnerships, and building the infrastructure to conduct research.

We have now expanded the program, recently announcing the recipients of the second cycle of Tier I awards. We will be providing a total of nearly $700,000 in funding for 47 projects across the country. These projects focus on 35 health issues, including spinal cord injuries, mental health, and elder health.

Our Pipeline Award Program Offices, organizations that assist in administration and management of the Pipeline to Proposal Awards, regularly collect data from the awardees and their partners on how their work is progressing. We’ve started analyzing information from our first group of awardees to share what they have learned. Here are some highlights:

Did these investments foster partnerships? 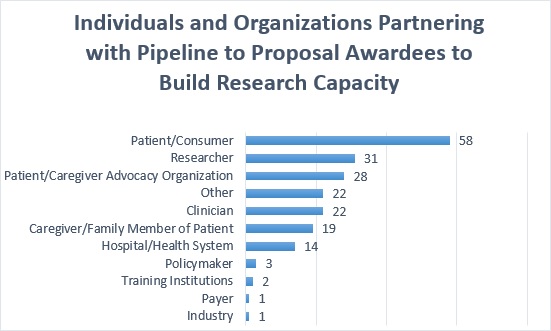 As these partnerships progress, we will track their success towards the goal of successfully engaging in CER. In the meantime, we define success as making concrete progress toward the individual project’s Tier I goals and qualifying to receive Tier II funding. When we analyzed input provided by awardees and their newly engaged partners upon completion of Tier I, we identified three major trends in partnership development. 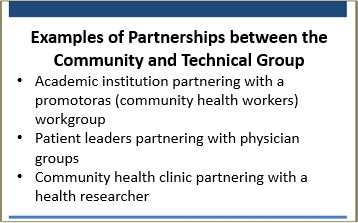 To what extent did this project prepare awardees to pursue research funding?

More than 80 percent of awardees agreed that their Pipeline to Proposal award prepared them to pursue research funding. They said that the resources, networking opportunities, and prestige derived from the award have the potential to produce a lasting impact on their identified health issues in their communities.

Many awardees reported clear intentions to move forward with additional funding for capacity building or full-fledged research. For example, one team reported that, with one of its partners, it had already submitted a research proposal to another funder.

Awardees also reported that the PCORI award increased their reach, led to other partnerships, and allowed for development of research ideas. Many projects described leveraging their funding into larger initiatives and strengthening their partnerships. They also wrote that PCORI funding opened doors: they were invited to take part in meetings, partnerships, and other projects related to their topics of interest to which they had not been invited before. One awardee noted “…because we have been able to contribute our own funds to projects, we feel that we are valuable, contributing members of the team.”

Many awardees said that this initial investment in partnership development will have a lasting impact on their work. One said, “This project was extremely helpful to jumpstart our [university’s] infrastructure for patient engagement and comparative effectiveness research agenda.” Another said, “We … appreciate the opportunity to focus on organizational development before implementing the research project. We feel that this process will result in a sustainable infrastructure that truly represents our targeted population.”

Did these partnerships embody the PCORI Engagement Principles?

PCORI has identified six Engagement Principles as elements of meaningful partnerships in research:

We were happy to see many awardees cite examples of how these principles are being put into practice in their work (see box below).

PCORI is committed to learning from our awardees and their partners about their experiences and how we can better support partnership development moving forward. We continue to look for improvements to how we invest in the community, as well as examples of successful partnerships, so that the community can grow from within. Stay tuned for additional Pipeline to Proposal funding opportunities in Fall 2015.

Interesting Blog! Worth the read.