A New Era in Alzheimer's Research Has Arrived, and There is a Place at the Table for Patients and Family Caregivers

Last month, there were tears of joy at my house when I learned of the Patient-Centered Outcome Research Institute’s (PCORI’s) award for a Patient-Powered Research Network (PPRN) focused on Alzheimer’s disease and other dementias. The new award is part of the expansion of PCORnet, the National Patient-Centered Clinical Research Network, a collaboration of health data networks to conduct patient-centered health outcomes research more quickly, less expensively, and with greater potential impact.

I was so eager to share this news that I spoke up at the July 27 meeting of the Alzheimer’s Advisory Council, the US Department of Health and Human Services body that created our National Plan to address this devastating disease. I said, “Imagine what we can achieve with patients, family caregivers, clinicians, health systems, and researchers working collaboratively.”

For almost 20 years, I have been the healthcare advocate and family caregiver for my parents, both of whom have struggled with dementia. More recently, my father-in-law was also diagnosed with the disease. Over the years, through the lens of this experience and my life sciences background, I saw that the clinical research system had little interest in family caregivers—therefore missing out on valuable input from the most underutilized member of the patient’s care team. 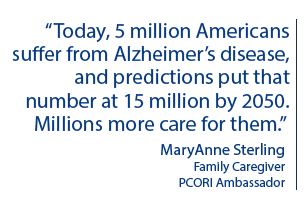 Today, 5 million Americans suffer from Alzheimer’s disease, and predictions put that number at 15 million by 2050. Millions more care for them. There are currently no treatments proven to modify the course of this disease, which is devastating to patients and their families.

As an outspoken advocate for families of Alzheimer’s disease patients, I’ve been involved with PCORI from its beginning. Early on, PCORI staff set up a meeting with the Alzheimer’s Association, an organization in which I have been active for many years, to gain insight from the family caregiver’s perspective. I was invited to that meeting. Since then, I’ve attended many PCORI events, become a PCORI Ambassador representing family caregivers, and served as an advisor on several research projects.

When PCORI announced its first awards to PPRNs early in 2014, I was disappointed that none addressed Alzheimer’s disease and other dementias. When I learned that no such organization had applied, I started a campaign—sending emails and cornering people at meetings—to be sure there was a strong application for the next round. And it succeeded.

The recent award created the National Alzheimer’s & Dementia Patient & Caregiver-Powered Research Network (AD PCPRN), which will connect researchers and people who have, are at risk for having, or care for someone who has Alzheimer’s disease or dementia. The PPRN will focus on developing, conducting, and disseminating patient-centered dementia research. It puts together a phenomenal team led by USAgainstAlzheimer’s (USA2), the Mayo Clinic, and the University of California-San Francisco’s Brain Health Registry. It plans to promote collaborations that include other advocacy organizations and industry partners developing diagnostics and treatments for dementia.

This PPRN will enroll large numbers of individuals through existing web-based registries that collect measures of patient cognition over time and self-reported information, such as a patient’s or family caregiver’s quality of life and responses to interventions. The AD PCPRN will also refer individuals to clinical trials and facilitate patient-focused studies, including research aimed at reducing burdens on family caregivers.

My strongest hope is that the PPRN will be the catalyst to get everyone on the research and care continuum working together to find better treatments and ways to provide more targeted support for families. Alzheimer’s disease affects the whole family, so Alzheimer’s research requires a “family approach” to be successful. We need to show the world that patient–family caregiver–clinician–researcher collaboration leads to bigger, better advances in dealing with a growing epidemic.

Dear Dr. Shankle and Dr. Ceppetelli, thank you for your comments and feedback. If you would like to contribute to the research project, please reach out to Glenn E. Smith, PhD, at the Mayo Clinic, who is the principal investigator of the project.

My husband was diagnosed with Lewy Body Disease after 3 years of testing by YALE, NIH AND Columbia. He died in 2001 and still not enough is known about this disease.
I hope that it can be incorporated into your current efforts.
Thank you.

having worked with alzheimer's patients and their families for more than 13 years as a mental health provider I have found that the emotions of the alzheimer's patient and that of caregivers is the most important health care component. I want to emphasize health care includes physical and psychological. I have observed hundreds of interactions and interventions with caregivers and patients where the emotions of both parties controlled the intervention - most often not helpful. I want to be clear that the caregiver in most instances is not aware that emotions are controlling the intervention.
If my comment is of interest I will elaborate on how to understand and use emotion intelligence and mindfulness in this most needed area.

We have a family history and because I am a cancer patient advocate, reading studies continually, I'm the person sharing info on Alzheimers. We hope that healthy lifestyle of fruits/veggies (on my case mostly organic), being physically active and handling stress, will reduce e our risk or delay onset.
Our grandparents did not show signs of the disease and the huge increase in numbers of cases indicates environmental components. I and our family hope attention will be paid to external factors that affect our genes and bodies.

This is great news. We would like to be included in this effort. I was on the original Leon Thal Symposium to Establish a Roadmap To prevent AD by 2020, which evolved into the current National Alzheimer's Project Act (NAPA). From that, we established the Orange County Vital Brain Aging Program in 2010, which has educated public, physicians about reducing risk of cognitive impairment due to AD and other causes. This program also provides web-based and in-person tools to briefly assess cognition and function with 97% accuracy for discriminating between normal aging and Mild Cognitive Impairment. Over 17,000 people in OC have been assessed, and OCVBAP has learned a great deal about delivering population cognitive health over the past 5 years. We would very much like to contribute to this effort. The program has been site visited by Dr. Ron Petersen, Jeffrey Cummings and Zaven Khachaturian with positive feedback. How can we have an opportunity to contribute?
Sincerely
Dr. Rod Shankle, Program Director, Orange County Vital Brain Aging Program

Alzheimer's and Dementia research can use some much needed attention!
Cognitive tests, preventative methods, and healthy proactive lifestyles are the only tools we have right now to battle cognitive impairments.
We need to unite to fight Alzheimer's together!!