It is devastating for anyone to lose somebody, especially when that person is a child. When my young, twin daughter received the diagnosis of stage IV neuroblastoma, a cancer of the nerve cells, I couldn’t understand how a child could suffer from this awful disease. She lost her life in 1985.

For me, it was a devastating trial, but it made me appreciate life even more. Instead of being disappointed, I decided that if I could do anything to help someone prevent cancer, then I was willing to do it.

After that, it just seemed like the doors opened up and the path became clear. I have been walking that path ever since. A path that led to patient-centered outcomes research and joining PCORI’s Advisory Panel on Patient Engagement.

In Crow Indian Nation where I’m from, our words are considered sacred and powerful. So, we choose them carefully.

We believe speaking negatively will bring something negative upon yourself. And the word, cancer, is not something we used. Actually, it does not even exist in Crow language.

So, the first step to cancer awareness and prevention was this word’s acceptance. The second: addressing the lack of good, quality care.

Women are the backbone of our community. Yet, they were not getting cancer screenings, and cervical cancer death rates were high.

It's really nice to know that there is a focus on individuals with IDD across the lifespan” and is pleased that more funders, including PCORI, are becoming interested in promoting “lifespan approaches

As patients of the Indian Health Service, we faced randomly scheduled appointments, few women providers, and doctors who came and went, making it difficult to develop a relationship and feel comfortable.

So, I began talking with fellow Crow women and the Indian Health Service to change that.

Through education, women learned the importance of pap tests, which screen for cervical cancer. And we realized it was okay to speak of cancer because that’s how we are going to overcome it. 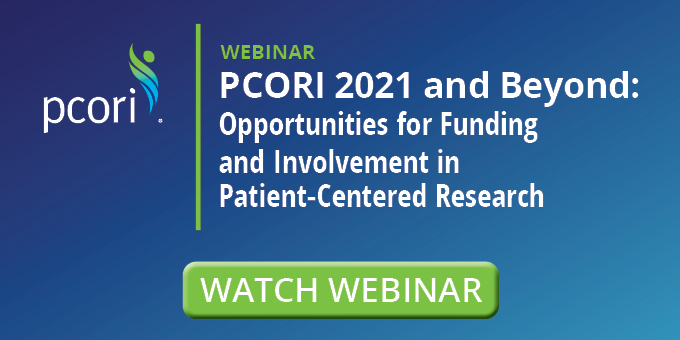 This breakthrough came from building bridges not only between the Crow community, tribal health, and the Indian Health Service, but also between Crow Nation and Montana State University.

My path led me to partner with the university’s Suzanne Held, PhD, MS.

Together for more than two decades, we have performed community-based participatory research and cancer awareness outreach on the Crow Indian Reservation. We built trust and overcame cultural taboos.

Our group, Messengers for Health, became a nonprofit, allowing us to expand and address other health disparities afflicting our people. For instance, Crow Nation faces great poverty, diabetes, and substance use disorder.

And unfortunately, all our health disparities put people at higher risk for COVID-19.

Now, Crow Nation is grieving. We are a close-knit community and people are passing away every week.

PCORI is seeking applications and nominations for open seats on its advisory panels: health disparities and delivery research, patient engagement, clinical trials, rare disease, and clinical effectiveness and decision science. Membership on an advisory panel offers the opportunity to work with other healthcare stakeholders to provide crucial input on the direction of PCORI-funded healthcare research.

More information on PCORI’s advisory panels can be found here.  Applications and nominations are due March 31, 2021. Click here to get started.

This COVID-19 crisis did not hit us at first. There were zero cases in Big Horn County where our reservation resides. So, people did not realize the importance of precautions.

That’s where Messengers came in because of the trust we have built. We developed videos for our Facebook page to talk about wearing masks and other precautions to take.

It was important for people to see my face—someone they trust and relate to who is speaking in both English and Crow Indian language to encourage people.

An Honor to Lead

When I was given the honor of becoming a member of a PCORI Advisory Panel in fall 2020 and sharing my experiences, I thought, I guess I’ve become a leader for my people without even realizing it.

I come to the panel to speak for them, so people can learn about the Crow Nation’s challenges. In turn, it has been motivating for me to learn others have the same kinds of challenges and barriers in their communities.

I encourage others to take part in this opportunity. There is much you can gain to continue leading your community on its path to better health.

#COVID19 has hit the Crow Indian Nation hard. @PCORI advisory panelist Alma McCormick shares how she has helped her community learn about precautions and the virus. https://pcori.me/2MqIl6k
Click To Tweet

The views expressed here are those of the author(s) and not necessarily those of PCORI.