What the Research Community Can Learn from Patient and Stakeholder Engagement

To mark our fourth anniversary, we invited representatives of our key stakeholder communities to describe the influence that PCORI has had on their work and their perspectives on clinical research. In this post, two physician-researchers talk about how their research has changed as they have engaged patients and other healthcare stakeholders. The views expressed are those of the author and not necessarily those of PCORI.

Medical research has largely been shaped by the priorities of scientists and health professionals, not patients. Specific aims and key questions usually evolve from the intellectual interests of these researchers or priorities outlined by funders. This research addresses important problems and helps steadily advance scientific knowledge but does not always focus on the health needs most important to patients and communities.

With its emphasis on engaging patients and other healthcare stakeholders, PCORI is transforming healthcare research, both in the studies it funds and by bringing national attention to engagement. For the first time in our memory, a major funder has stipulated that research awards are contingent on demonstrating a genuine effort to engage patients and other stakeholders throughout the research process, beginning with the development of the proposal, if not earlier.

Patient and stakeholder engagement is valuable for empowering the affected population and increasing the likelihood that a successful intervention will actually be implemented. Engagement also enhances the science itself. The inherent biases of investigators and funders color what they perceive as key questions, research priorities, and measures of success. Patients and stakeholders provide a check on those biases and move the research agenda toward questions and evaluation metrics that matter most to them. Patients and other stakeholders are well positioned to help design interventions that will work. 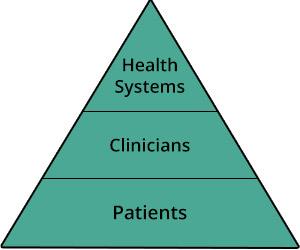 PCORI has helped investigators like us recognize the full spectrum of stakeholders to engage, including many that past research has too often neglected. The most important of these disenfranchised audiences has been patients, a deficiency PCORI-funded studies are working to correct. PCORI also recognizes the importance of consulting clinicians in the trenches, who know whether an intervention will be realistic for busy practices, and of engaging health systems, payers, and policy makers with a stake in the outcome.

A Shift in Our Thinking

Our PCORI Pilot Project benefited greatly from PCORI’s encouragement to engage patients and other stakeholders. Our study required the development of several tools to collect detailed data on patients’ preferences in approaching decisions about cancer screening. We devoted our first year to engaging patients and other stakeholders in designing the tools and integrating those tools into practice. The engagement process transformed our thinking about key questions, information needs, and how to make our end-products most useful to patients and clinicians.

As our enthusiasm for patient engagement grew during the project, we expanded our original plans beyond traditional focus groups, cognitive testing, and usability testing. We invited our focus group participants to join an ongoing advisory panel that met online and in person to review draft instruments. We also formed a permanent patient advisory board that met every other month on Saturday mornings.

The opinions expressed by patients and clinicians often differed from the advice received from our academic experts, seven seasoned co-investigators at our university and an Expert Advisory Panel of six leading decision scientists. For example, patients wanted to select from a comprehensive list of topics to discuss with their clinician, while the experts told us to shorten the list to avoid overwhelming the patients. Furthermore, words that the experts recommended we use were deemed unclear by patients (and their concerns were reinforced by cognitive testing). Our patient partners dramatically redesigned our cancer screening tools, which have now been administered to more than 2,000 patients. Their engagement has produced tangible results that are the subject of a paper currently in development.

During the Pilot Project, our initial efforts to satisfy requirements for PCORI grew into a genuine appreciation of the wisdom patients offer. We now seek their advice regularly, in every phase of our studies, (even those not funded by -PCORI, and we often put more stock in what they say than in the advice of our expert and academic partners.

In an arrangement formalized with our Institutional Review Board, patient advisors who were once “human subjects” are now reclassified as “co-investigators.” Patients are treated as coequal partners: patients have been coauthors of journal articles and presenters at academic conferences.

Having established a practice-based research network (PBRN) in 1996, we already valued input from primary care clinicians. But the PCORI Pilot Project drew us into closer consultation with clinicians. We formed a Clinician Advisory Board that met every other month to shape our network’s research agenda based on their priorities, needs, and experiences. Recently, we merged the Clinician Advisory Board with our Patient Advisory Board, described above. These groups have come together nicely, sharing ideas and perspectives to provide a new level of input and direction to our PBRN.

In parallel to our work on the PCORI Pilot Project, our Center on Society and Health has benefited from community engagement. As part of its research on the conditions that shape the health of vulnerable populations, the center works with civic organizations, municipal agencies, mental health professionals, law enforcement, and other groups who serve affected populations. Input from the community has been invaluable. For example, we learned that models in the published literature that link education, food insecurity, unstable housing, and violence to adverse health outcomes are incomplete when compared with models developed by residents of a disadvantaged, inner-city neighborhood. The academic models overlook important contextual factors known to the community, such as how victims and families are affected by firearm violence. These community insights have found their way into a health impact assessment we developed for Congress, issue briefs and videos on education, a request from local developers to engage public housing residents, and an investigation of the effects of firearm violence on residents of Richmond, Virginia.

Engagement increases the relevance of research to the larger agenda of improving population health. Rather than asking how patients and communities can get engaged in research, a better question is, how can we engage researchers in the work of communities? Old-school investigators (and some leaders at NIH) must abandon the outdated notion that the main utility of patients to research is as subjects for clinical trials. The trials themselves may matter little if they don’t reflect important population health questions.

Public health and community development have a history of engaging stakeholders through methods such as community-based participatory research. Clinical investigators and their funders must now become partners in the new movement of collective impact, in which a variety of stakeholders (e.g., employers, schools, governments, hospitals, industries, investors) are applying their respective talents in cities around the country in pursuit of agreed-upon population health goals.

In our research, patients and the community now set the agenda. We meet with them regularly to understand their health priorities and learn what data they need to take action toward social change. Their burning questions are the information voids that set a meaningful research agenda. The challenge is how to excel in engaging patients, other stakeholders, and the community in defining research questions, an area we have begun to investigate more formally through a new PCORI award.

Engagement of patients and other stakeholders is not a panacea or without limitations. It can be costly and time-consuming. Nonscientists may have unrealistic expectations about research data. Their input is not always useful, but the same can be said for investigators. The wisdom of PCORI is to recognize that all perspectives deserve a voice in shaping studies, if research is to really matter.