Some adults with obesity are not able to lose weight with diet and exercise alone. Surgery can help people lose weight and improve problems related to obesity, like diabetes. But surgery can also cause harm. 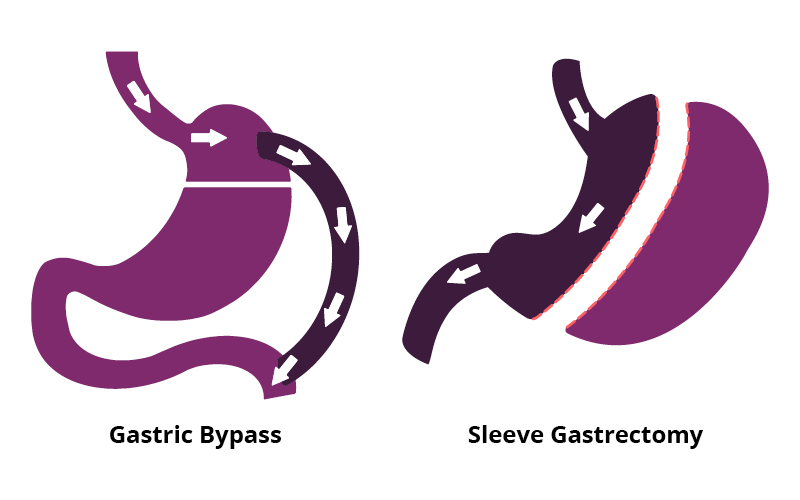 Two of the most common types of weight loss surgery are:

The study also included a third type of surgery called adjustable gastric banding, or lap band. This update does not include findings related to lap band because many weight loss surgery centers no longer perform this surgery.

A PCORI-funded study found that people lost more weight with gastric bypass than with sleeve. But more people who had gastric bypass needed additional surgeries and hospitalizations than those who had sleeve.

Among patients with type 2 diabetes, about the same number of people no longer had to take medicine for their diabetes with both surgeries. However, more people with sleeve had their diabetes return.

Other benefits. Many patients who had either type of surgery noted other positive results. Patients said they could move and function better. Some patients also saw improvements in chronic health problems or in their mood, depression, or anxiety.

Bariatric surgery can affect more than your physical life. It can also affect your mental health and social life. For example, some patients were surprised by negative reactions from friends and family who think surgery is an easy shortcut for losing weight. Others felt unprepared for the strict diet and exercise that surgery required or changes to their body after losing weight quickly.

Your clinician, like your doctor or PA, may have resources to help you prepare for life after surgery. Support may include:

➤ Classes to prepare for changes in diet, exercise, and lifestyle

➤ Patient support groups in your area.

What Should I Ask My Clinician?

You and your clinician can talk about the benefits and harms you might expect from weight loss surgery. Questions you may want to ask your clinician include:

➤ Do you think I am a good fit for weight loss surgery? Why or why not?

➤ Which weight loss surgery type is best for me?

➤ What changes will I have to make to my lifestyle before surgery? What about after surgery?

➤ What other changes or challenges should I expect?

➤ What kind of support is available to me before and after surgery?

➤ What can I do to keep from regaining weight after I have surgery?

A version of this Evidence Update written for clinicians is available here. You may want to share it with your clinician at your next visit.

Researchers looked at health data for patients with obesity who had weight loss surgery between 2005 and 2015. Patients had a body mass index, or BMI, of at least 35. Data came from 41 health systems around the country that were part of PCORnet®, the National Patient Centered Clinical Research Network.

Read more about this study at www.pcori.org/Arterburn218

The information in this publication is not intended to be a substitute for professional medical advice. This update summarizes findings from a PCORI research award to Kaiser Permanente Washington Health Research Institute.