Health Risks for Each Individual, Not for the Average Patient

When retired aluminum industry technologist John Schultz went for a check-up with his longtime Monroeville, Pennsylvania, physician in 2018, he got some worrying news. 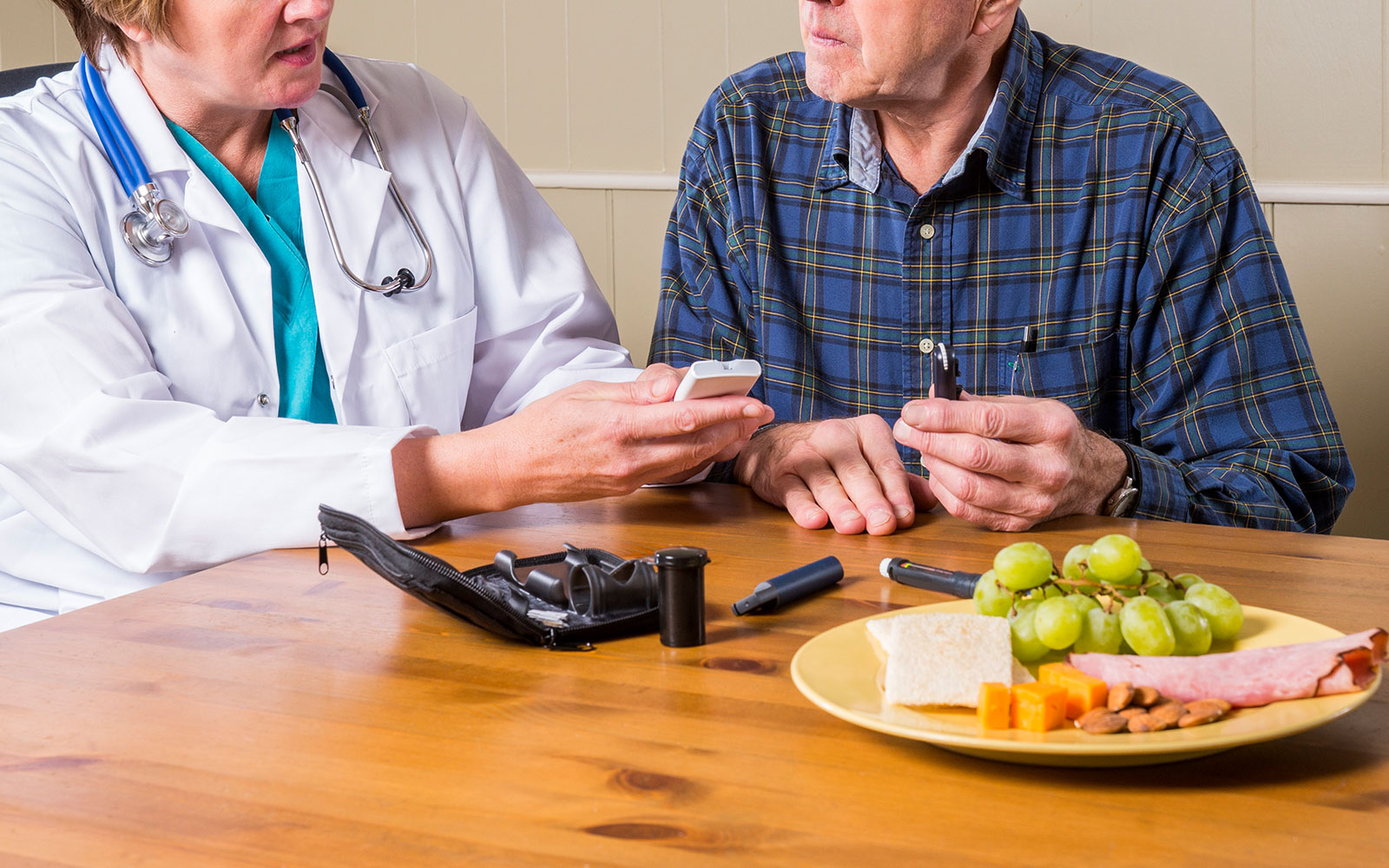 “He said that my BMI [body mass index] was creeping up, that my blood pressure was creeping up, and that if I continued on the path I was on, it could lead me straight to diabetes,” Schultz said.

The news worried Schultz, who has a younger brother with diabetes. His doctor, Francis Colangelo, MD, MS, referred him to a 16-week group class taught at a YMCA in the nearby community of Plum. Colangelo told him the class would be intense, teaching lifestyle-changing habits of healthy eating and regular exercise.

“The world is getting smaller but the people are getting a lot bigger. It scared me to think what could happen to me if I didn’t make changes,” Schultz said.

Thanks to a risk-prediction model being adapted for use in clinic settings with a PCORI Dissemination and Implementation (D&I) Award, Colangelo was able to use Schultz’s personal health data to quantify just how likely it was that he would develop diabetes if he didn’t change course. In Schultz’s case, the risk was high. That information motivated Schultz to make those changes.

“If you’re singled out of a large population as being at the highest risk for developing a condition, it really wakes you up,” explained John Cuddeback, MD, PhD, Chief Medical Informatics Officer at the American Medical Group Association (AMGA).

The world is getting smaller but the people are getting a lot bigger. It scared me to think what could happen to me if I didn’t make changes.

“With the fear of dying young and not being around to share time with my wife, I went into the class as seriously as I could,” Schultz said. That meant learning to eat healthier, including cutting back on one of his favorite foods—French fries—to only once every two or three months. He also learned tips for ordering healthier options in restaurants.

After he started the class in September 2018, his insurance company offered him a free activity-tracking smartwatch in early 2019. “I’ve been wearing it religiously,” he said. “I do everything in my power to get my 10,000 steps in, and I think that’s been helpful.”

Schultz’s efforts have led to an impressive turnaround. He set a goal of losing seven to 10 percent of his body weight over the 16-week class, and hit that mark in the first two months. He’s now lost more than 30 pounds.

Schultz, who will celebrate his 70th birthday in December, has also lowered his heart rate and blood pressure to more normal values. He is less winded, can mow the lawn more quickly, and more easily navigates the stairs at PNC Park, which he and his wife, Kathy, visit frequently to cheer on his beloved Major League Baseball team, the Pittsburgh Pirates.

“Since I lost the weight, I’ve had more energy, and I’m doing more things,” Schultz said. “From that meeting with Frank, it was a snowball effect. I decided I didn’t want to go on meds, so I took the classes and started feeling a little bit better, and that just motivated me to want to keep doing more.”

John Cuddeback and David Kent describe their efforts to develop and implement a prediction method tool to allow doctors to see information on a patient’s risk of developing diabetes.

Schultz’s success is, of course, thanks to the lifestyle changes he has made. But his referral to the 16-week class can be traced back to a PCORI-funded pilot project awarded in 2012. The research team, led by David Kent, MD, MS, at Tufts Medical Center, reanalyzed data from 32 clinical studies to see how treatments affected different subgroups of participants in each study.

His team created mathematical models, using the personal health characteristics of each patient at the beginning of the study, to predict the risk of the undesirable health outcome that was the focus of the study. They then divided the patients from each study into subgroups based on their predicted risk of the outcome.

In a few of the studies Kent reanalyzed, only a small group of patients benefited from the treatment. But because the benefit for these few patients was so great, the average effect was still substantial. “In several trials, the differences between risk groups were so large that clinical decision making should really be tailored to individual risk,” Kent said.

One of those trials was the Diabetes Prevention Program Study, a landmark clinical trial that tracked participants’ progression from prediabetes to diabetes over three years. It found that an intensive, 16-week diet and exercise program—like the one that Schultz would join—reduced that progression by 58 percent, and the diabetes drug metformin reduced it by 31 percent.

But Kent’s reanalysis showed that most of the benefit was concentrated in study patients at highest risk for the disease (see graphic). Other patients in the study got much less or no benefit. “Using data that were available at the beginning of the trial, you could predict who would get the most benefit, and who was likely to receive little or no benefit,” Cuddeback said.

If you’re singled out of a large population as being at the highest risk for developing a condition, it really wakes you up.

A Win-Win for Patients and Providers

To build on the success of the initial PCORI project, Kent received additional PCORI funding in 2017 for the D&I project that’s now in progress. He is working closely with Cuddeback and AMGA, which is integrating the diabetes prediction method into approximately 50 clinics in two of its member health systems in Pennsylvania and the St. Louis, Missouri, area.

“I had an opportunity to talk with David about his study, and the light bulb went on for me that this might really be helpful for both patients and health systems,” Cuddeback said.

He pointed to statistics that show diabetes’ burden on the national healthcare system. One in three American adults—an estimated 84 million people—has prediabetes, and 90 percent of them aren’t even aware of it. The prediction model is a way for clinicians to identify which patients are more likely to develop diabetes over three years, and prioritize prevention for those who are most likely to benefit.

“Frontline clinicians are overwhelmed and feel a need for something to help them prioritize all the people with prediabetes. Thanks to David’s initial PCORI project, we have it,” Cuddeback said. “We keep hearing about personalized medicine based on gene sequencing. This is personalized medicine we can do today, with information we already have on hand.”

Using new technical standards for electronic health records, the cloud-based application can securely retrieve the patient’s data, do the calculation, and return the results, so the clinician and patient can use them for shared decision making.

Given the enormous benefit to patients on an individual level—and the healthcare system on a larger level—Cuddeback says it’s hard to overstate the impact that prediction-based modeling could have, especially if it’s expanded to other high-burden health conditions.

“Many physicians still think that each person who would have qualified for a study will get the average treatment effect seen in the study,” Cuddeback said. “This project shows we can do a lot better than that. By focusing prevention on those who are at greatest risk, we can benefit those individuals and the health system as a whole.”

For an example of this PCORI-funded project’s success, the researchers need look no further than Schultz climbing the stairs at PNC Park in Pittsburgh to take in a Pirates game.

Goal: To implement a prediction method that uses a mathematical formula to tell doctors how likely it is that a particular patient will benefit from a treatment.

Health Conditions Health Conditions These are the broad terms we use to categorize our funded research studies; specific diseases or conditions are included within the appropriate larger category. Note: not all of our funded projects focus on a single disease or condition; some touch on multiple diseases or conditions, research methods, or broader health system interventions. Such projects won’t be listed by a primary disease/condition and so won’t appear if you use this filter tool to find them. View Glossary
Populations Populations PCORI is interested in research that seeks to better understand how different clinical and health system options work for different people. These populations are frequently studied in our portfolio or identified as being of interest by our stakeholders. View Glossary