Sometimes doctors recommend that women get a breast MRI along with their mammogram. An MRI uses magnetic fields, or radio waves, and a computer to take pictures of the inside of the breast. But doctors don’t know whether adding a breast MRI is better than mammograms alone at finding second breast cancers.

When doctors used a breast MRI with or without a mammogram, they were more likely to find cancer than when they used a mammogram alone. Breast MRIs also led to more biopsies. Biopsies confirm whether a tissue sample is cancer or not. But they may cause scarring, pain, or infection. Women may worry that the cancer has come back, even if it hasn’t.

To identify which women had second breast cancers and how doctors found the cancer, the research team looked at

A group of women with a personal history of breast cancer and cancer specialists helped guide the study.

Future research could see whether having breast MRIs with mammograms helps to find breast cancer for specific groups of women, such as by age at diagnosis or by how aggressive the first cancer was.

Patients and their doctors can use these results to help decide whether to use a breast MRI with the yearly mammogram to check for second breast cancers.

This observational cohort study compared mammography alone versus breast MRI with or without mammography to detect a second occurrence of breast cancer, which includes either a new cancer or a recurrence of a first cancer. The research team reviewed breast imaging data from 2005 to 2012 from the Breast Cancer Surveillance Consortium registry, which operates in California, New Hampshire, North Carolina, Vermont, and Washington State. The team analyzed records from 13,266 women with a PHBC who received imaging exams at least six months after diagnosis with stage 0–III breast cancer. Of these women, 11,745 had mammography alone and 1,521 had an MRI with or without mammography. In addition, 77% were white, 9% were black, 9% were Asian or Pacific Islander, 2% were mixed or another race, and 3% were Hispanic.

The research team used imaging results to calculate the performance measures for mammography and breast MRI. Researchers first looked at differences in patient characteristics between women who had mammography and women who had breast MRI. Then, the team used multivariable logistic regression to compare the two imaging modalities, adjusting for confounders by including covariates in the model and by using propensity score matching.

During the study, a group of women with PHBC and cancer specialists gave feedback to the team.

Patient characteristics. Compared with those who received mammography only, women who received breast MRI were younger, more educated, and more likely to have higher incomes. They were also more likely to have interval-detected primary cancer, dense breast tissue, a more recent diagnosis, a primary diagnosis of invasive carcinoma, a stage IIB or higher primary diagnosis, and to have had chemotherapy for primary breast cancer.

Performance measures. Accounting for differences in patient and primary cancer characteristics, multivariable logistic regression showed that, compared to mammography only, breast MRI had a higher

The research team was not able to adjust for all potential confounders, and the sample size was too small to evaluate all performance measures.

Compared with women who had mammography alone, women who had surveillance breast MRI with or without mammography had two-fold higher biopsy rates with improved cancer detection, but no improvement in sensitivity and no decrease in interval cancer rates. These findings highlight the benefits and harms of using MRI breast imaging with mammography.

Future research could examine whether there are subgroups of women for whom breast MRI plus mammography may be more effective for surveillance imaging than mammography alone.

Surveillance Breast MRI and Mammography: Comparison in Women with a Personal History of Breast Cancer

Surveillance for second breast cancer events in women with a personal history of breast cancer using breast MRI: a systematic review and meta-analysis

From Principles to Practice: Real-World Patient and Stakeholder Engagement in Breast Cancer Research

The patient voice in research - evolution of a role. 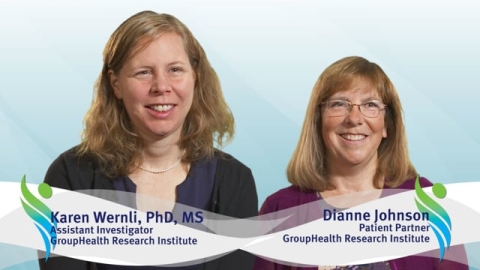 Getting Buy-In Before Results

Peer review identified the following strengths and limitations in the report: