Comparing Intensity of Follow-Up Tests after Surgery for Colorectal Cancer

Regular follow-up tests can help patients who have had surgery for colorectal cancer find out if the cancer has come back. These tests may include CT scans or other imaging scans and blood tests. But researchers don’t know if having more tests works better for patients than having fewer tests.

In this study, the research team compared health data for patients who received care at two types of clinics:

A group of patients, doctors, and health professionals helped design the study and analyze the data.

Results may have been different if researchers had used other ways to categorize clinics into groups that give more versus fewer tests. The team compared patients based on the type of clinic they went to for follow-up tests. But some patients at the clinics that gave more tests might have had fewer tests.

Future research could use a different study design to compare follow-up methods, such as following patients who have more versus fewer tests going forward.

Patients who have had colorectal cancer and their doctors can use the results to discuss how often to have follow-up tests.

This retrospective observational cohort study compared the effectiveness of high- versus low- intensity surveillance facilities on improving five-year rates of CRC recurrence detection, surgical resection, and overall survival among patients with CRC who underwent surgical resection for CRC between 2006 and 2007.

Researchers reviewed data from a national cancer registry merged with medical records of patients for the purpose of classifying 1,175 accredited treatment facilities as performing either high- or low-intensity surveillance. They based their classification on the use of two tests to detect cancer recurrence: CT or other imaging, and carcinoembryonic antigen (CEA) levels. In the three years following surgery, high-intensity surveillance facilities performed an average of 2.9 imaging and 4.3 CEA tests per patient, and low-intensity surveillance facilities performed an average 1.6 imaging and 1.6 CEA tests per patient.

Clinicians, patients, and patient advocates helped design the study and interpret the results.

Across facilities, the five-year recurrence rate was 19%, with 82% of recurrent disease detected within three years of initial resection. The risk of recurrence was higher among patients with higher-stage cancer at diagnosis.

In this study, surveillance intensity at facilities was not associated with five-year rates of recurrence detection, surgical resection, or overall survival among patients who underwent CRC resection.

Future research could prospectively validate the effect of different levels of surveillance intensity on detection of CRC recurrence and overall survival.

Studying the Frequency of Testing for Colorectal Cancer Survivors (right)
Principal Investigator George Chang discusses this project, which examined whether the frequency of follow-up testing of colorectal cancer survivors had an effect on the detection of recurrence or survival.

How Frequently Should Cancer Survivors be Screened for Disease Recurrence? Is More Always Better?
In August 2019, the National Alliance of Healthcare Purchaser Coalitions hosted a webinar discussion about the frequency of testing and screening practices following surgery for colorectal cancer. The webinar featured George J. Chang, MD, MS, who discussed his findings’ possible impact for employers and influence on medical guidelines, and compared current US practices in relation to other countries.

Association Between Intensity of Posttreatment Surveillance Testing and Detection of Recurrence in Patients With Colorectal Cancer.

Predicting Risk of Recurrence After Colorectal Cancer Surgery in the United States: An Analysis of a Special Commission on Cancer National Study 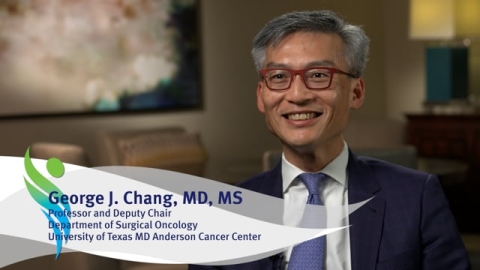 Studying the Frequency of Testing for Colorectal Cancer Survivors