When a child has head trauma, parents in the emergency room (ER) need to decide, with their doctor, how to check if the child has a traumatic brain injury (TBI). A TBI occurs when an injury causes bleeding in or around the brain. One way to check for a TBI is a computed tomography (CT) scan, which takes pictures of the brain. Another way is home monitoring, where parents wait and see if their child develops TBI symptoms.

For children at low risk of TBI, doctors recommend home monitoring. For children at high risk, doctors recommend a CT scan. However, for a child at medium risk, deciding which way to check for a TBI can be hard. A CT scan shows quickly if a child has a TBI, but it exposes the child to radiation, may require a long wait in the ER, and may cost more than home monitoring. Home monitoring takes longer to see if a child has a TBI, and parents may have to come back to the ER if their child’s symptoms get worse.

The research team created a decision aid to help doctors talk with parents about whether their children should get CT scans or have home monitoring. A decision aid can help parents choose between two or more healthcare options based on what is most important to them. The team wanted to know if the decision aid helped parents learn and make decisions about care for their child.

Only one child in the study had a TBI. The child was in the group whose doctor didn’t use the decision aid.

The study included 172 doctors of 971 children. The children went to one of seven ERs in Massachusetts, Minnesota, or Ohio. The children had head trauma, and doctors thought they had a medium risk of TBI based on symptoms. About 74 percent of children were white, 12 percent were African American, and 16 percent were other races. The children’s average age was seven.

Researchers, parents, doctors, a graphic designer, and a radiation specialist helped the research team create the decision aid. A parent whose child had been to the ER for head trauma previously was also part of the team. The decision aid was a paper handout that helped parents understand different types of brain injuries, know their child’s risk for TBI, and know the benefits and risks of home monitoring and CT scans.

The research team assigned doctors by chance to one of two groups. Doctors in the first group used the decision aid during their ER visits with the parents and children; doctors in the second group did not. Parents in both groups took a survey about themselves right before their doctor visit. After the ER visit, parents took a survey about TBI, their experiences in the ER, and deciding on a treatment plan.

The research team looked at medical records to see how many children got CT scans during the ER visit. They also looked at how many times parents took their children to the hospital or ER after the first visit and how many of the children who did not get a CT scan came back to the ER with a TBI. The team videotaped the doctor visits to see how much parents participated in the decision-making process.

Future research could look at how best to use the decision aid in the ER, where doctor visits are often short.

Doctors and parents can use the decision aid in the ER to help decide how to check for a TBI.

When children with head trauma are at moderate risk of ciTBI, it is not always clear if they need further testing or if a watch and wait approach is best. The research team conducted a randomized controlled trial to test the effectiveness of a decision aid designed to help parents of children with head trauma at moderate risk for ciTBI learn about this condition and decide between two diagnostic options: CT scan of the head or active observation at home.

Clinicians, researchers, parents, a graphic designer, and a radiation physicist helped create the decision aid and select study outcomes. A parent advocate served as co-investigator and member of the research steering committee. The decision aid was a paper handout that helped parents understand different types of brain injuries, their child’s risk for ciTBI, and the advantages and disadvantages of the two diagnostic options in light of their own preferences.

The study included 172 clinicians serving 971 parents of children with head trauma who were at moderate risk for ciTBI and who visited one of seven EDs in Massachusetts, Minnesota, or Ohio. The research team randomly assigned the clinicians to one of two groups: an intervention group, in which clinicians used the decision aid with parents, and a control group that did not use the decision aid. About 74% of children were white, 12% were African American, and 16% were other races. The children’s average age was seven.

Parents in both groups took a survey before the clinician visit about their demographics and other personal characteristics. Immediately after the visit, parents took a survey about their knowledge of their children’s risk of ciTBI and available diagnostic options, decisional conflicts they experienced, trust in their clinicians, and satisfaction with the information discussed during the visit.

The research team collected additional information seven days after the ED visit via phone follow-up and hospital billing records. Data collected included numbers of children who had CT scans, additional visits to the hospital or ED, and children who did not get a CT scan who returned to the ED with ciTBI. The research team also reviewed video recordings of the clinician-and-parent visits to assess parents’ engagement in the decision-making process.

One child in the control group and none in the intervention group had a ciTBI.

This study demonstrated that the decision aid can help facilitate shared decision-making for parents of children who have experienced head trauma and are at moderate risk of ciTBI, regarding their children’s treatment.

Future research could investigate how best to embed routine use of the decision aid in emergency care, in particular addressing the short time available during ED visits.

Article Highlight: Head CT scans may detect evidence of brain injury in children after minor head trauma, but they also expose children to radiation. In a JAMA Network Open article, this study reported that a decision aid used in emergency departments helped parents make better-informed decisions about whether their children would receive CT scans. Parents who used the aid had a better understanding of the symptoms of concussion, their child’s relative risk of brain injury, and the pros and cons of head CT scans.

Effectiveness of the head CT choice decision aid in parents of children with minor head trauma: study protocol for a multicenter randomized trial 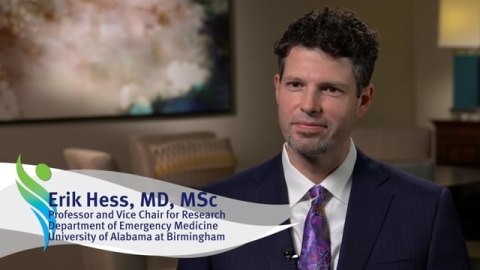 In response to peer review, Hess made changes including