Between Clinicians and Patients, Trained Community Members May Provide a Key Link

An older woman with dangerously high blood pressure kept missing her medical appointments. She didn’t tell her doctor that her electricity had been cut off, forcing medical issues to take a back seat to getting the lights and heat restored. But she did tell one member of her medical team, Nadirah Rogers, who explained the problem to the woman’s doctor. Rogers also introduced the patient to programs that reduced her electric bill and helped her pay rent. Subsequently, the woman’s stress level—and blood pressure—dropped.

Rogers is a community health worker (CHW), a trained layperson who serves as a link between medical professionals and patients.

“Patients don’t see me just as someone working at the doctor’s office. They see me as just like them. We share experiences and struggles,” says Rogers. 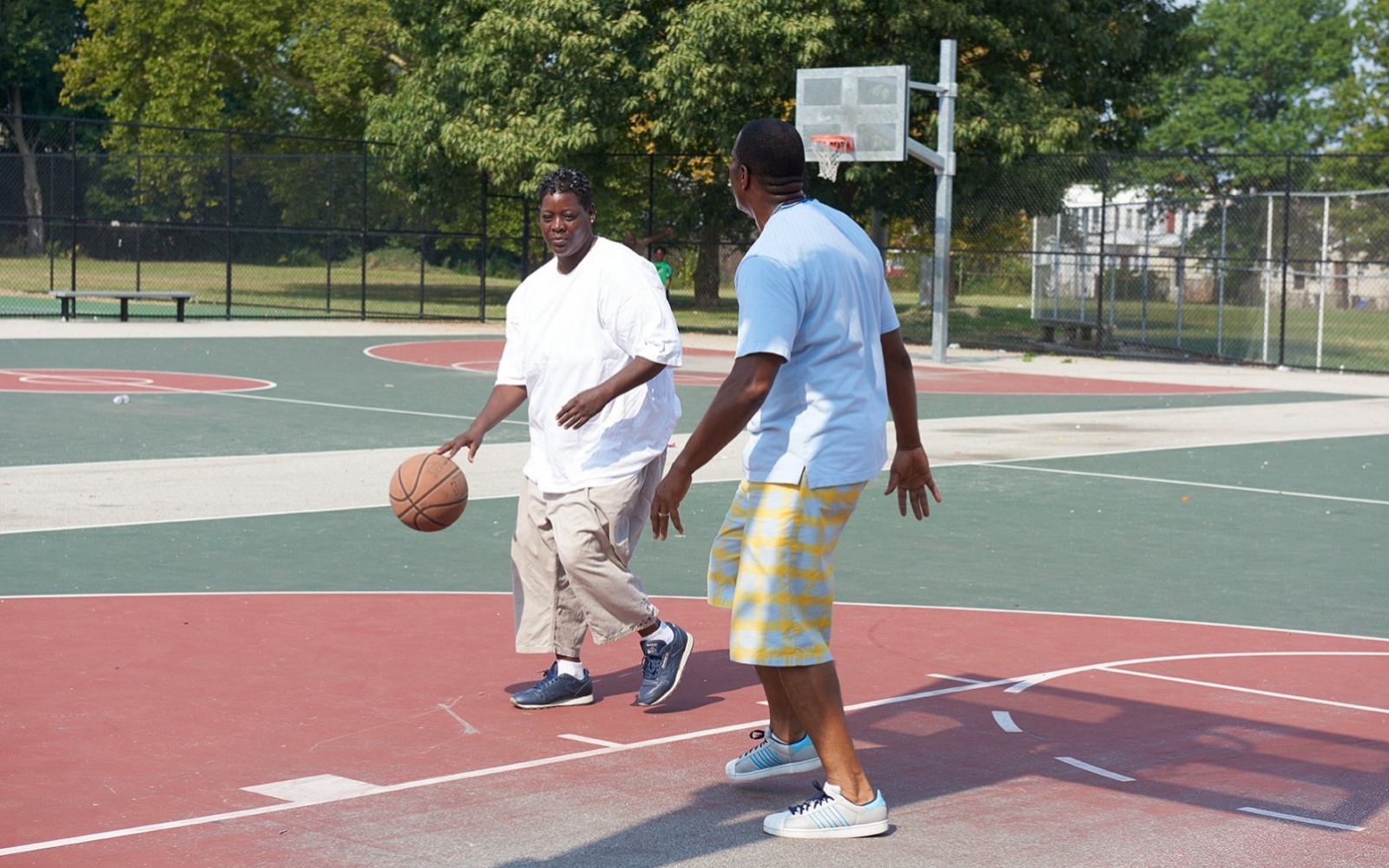 Rogers participates in one of several dozen PCORI-funded projects that are evaluating whether using such trained laypeople can help improve outcomes. These projects typically compare outcomes between approaches to patient care that do or don’t include CHWs.

CHWs—and laypeople in the related role of patient navigators—can take on a wide range of responsibilities, including health monitoring, care coordination, and educating patients about their diseases and the health system. CHWs and patient navigators may also connect patients with community resources to facilitate care or provide social support.

The role of trained community healthcare workers is rapidly evolving. Historical reports trace their origins to Russia and China in the early 17th century. In the United States, CHWs begin appearing in the medical literature in the mid-1960s. Recent years have seen increased incentives and opportunities for including CHWs in health care.

Community health workers (CHWs)? CHWs serve as an intermediary between health professionals and the community they serve in order to communicate community needs or availability of health services. CHWs may conduct needs assessments of the communities they serve, provide linkages between standard medical care and care within the community, and sometimes provide lay health services such as health promotion, patient monitoring, or ensuring medication adherence. CHWs may complete formal training and in some states are required to obtain certification. CHWs may or may not be members of the study population’s peer or socioeconomic group.

PCORI funds studies that look at CHWs, patient navigators, and others who perform similar functions. Many of the projects are exploring whether lay members of a healthcare team can reduce disparities in health and care by lowering barriers to patients’ receiving timely care and following their treatment plans.

Sometimes patients’ families work with lay members of a medical team. One project examines the impact of peer navigators who assist parents of newborns receiving intensive care. Among the outcomes being measured are healthcare utilization, infant immunizations, and parents’ stress, anxiety, and depression.

We will closely evaluate the results of these and other studies to determine the impact of CHWs and patient navigators on easing access to care and improving health outcomes. These studies should help us fill the gaps in current knowledge about the effectiveness of these types of workers. We hope to ultimately provide information on how CHWs can best serve in a variety of healthcare settings.

Below, read about two PCORI-funded studies—one that compares ways CHWs can support people with chronic medical conditions, and another that measures the effects of an intervention provided by CHWs to people in Appalachia who have risk factors for cardiovascular disease.

Low-income patients with more than one chronic condition face many barriers to health, and a PCORI-funded project wants to know if community health workers (CHWs) can help. “A lot of doctors just see patients for a brief moment, and they have no clue what’s going on in their life,” says Nadirah Rogers, a CHW at Spectrum Health Services in West Philadelphia.

Rogers is a CHW in a PCORI-funded study of a program called Individualized Management for Patient-Centered Targets (IMPaCT), developed by a team at the University of Pennsylvania. “Because patients set their own goals and agenda, the intervention is flexible and patient-centered,” says project co-principal investigator Shreya Kangovi, MD.

Currently, about 1,500 low-income patients living in West/Southwest Philadelphia are receiving IMPaCT in addition to their routine primary care. The program relies on CHWs who are carefully screened before hiring for their interpersonal skills and then trained in a month-long college-accredited course. The IMPaCT team wanted to test whether the program, previously shown useful for hospitalized patients, is effective in producing outcomes important to patients living in the community.

The PCORI-funded study recruited 592 patients who have two or more of the following chronic conditions: diabetes, high blood pressure, obesity, or tobacco dependence. Patients selected a chronic disease management goal with the guidance of their primary care provider. Half of the patients were then randomly selected to receive six months of tailored IMPaCT support from a CHW to aid them in reaching their goals.

CHWs are now helping patients create action plans for addressing factors that patients believe have affected their health, including, for example, obtaining stable housing or child care. CHWs provide hands-on support, for example by exercising with patients, facilitating communication with a doctor, assisting with filling out housing forms, or helping place a family member in rehab. To prevent a “voltage drop” at the end of the six-month program, CHWs connect patients with long-term support, including a peer group that CHWs facilitate, says Judith A. Long, MD, the study’s principal investigator.

The investigators will see whether patients in the CHW-assisted group have better patient-centered outcomes: feeling better physically, achieving better chronic disease control, improving mental health, having better quality of care, feeling more in control of their own health, and requiring fewer hospitalizations.

IMPaCT shares PCORI’s emphases on patient-centeredness and community engagement, says Long. The program began in 2010, with hundreds of interviews with patients in low-income populations with high rates of chronic illness. The interviews’ goals were to determine what made it hard for patients to stay healthy and what they felt they needed to do to achieve their health goals.

Most of those interviews were conducted by IMPaCT lay co-investigator Tamala Carter, who comes from Southwest Philadelphia, as do many of the patients IMPaCT aims to serve. “I interview high-risk patients and get their voices on what makes it hard to stay heathy, not just medical but all life issues, and their ideas for improving their health,” says Carter. She has conducted hundreds of interviews, many of them on people’s front porches.

Kangovi says, “Tamala helped us channel the patient voice, often not engaged very concretely. We mapped the feedback to very granular details of the design of the intervention.” The team’s analysis of Carter’s interviews identified about 30 types of barriers that patients said prevented them from achieving their health goals.

For example, a CHW was having a hard time encouraging a 70-year-old woman to stop eating certain foods. When Carter interviewed her, the woman said that as a child she had been “dirt poor.” Carter recalls, “She told me that her goal in life had been to be able to buy and eat whatever she wanted.”

For a patient like the 70-year-old woman, Rogers says that her approach is not to coerce, but rather to listen and meet patients where they are. “You can’t make someone do what they don’t want to do,” she says, “but I would say, ‘You might want to consider this if you want to stay around a little bit longer.’”

Rogers has several family members with chronic medical conditions and hopes to raise awareness about the role of CHWs. “We work really hard to help people to reach their health goals, to get their health on track, and to see that it’s important for them to stay healthy.”

Long says that CHWs are chosen for being empathetic and caring, “Working with them is great. They really provide a very different perspective.”

Appalachian Kentucky has a far different feel than impoverished urban areas, but the people there suffer from similar—and sometimes worse—health problems. Appalachians tend to have low incomes and high levels of cardiovascular disease.

“Just telling people to seek care for cardiovascular risk factors is ineffective,” says principal investigator Debra Moser, PhD, of the University of Kentucky. “There aren’t enough healthcare providers, and there’s little focus on preventive health care. You have to teach people to manage their own care when it comes to making lifestyle changes.”

Recruiting within the Community

The study enrolled more than 350 individuals who did not have a primary care provider and had two or more modifiable risk factors for cardiovascular disease, such as high blood pressure, high cholesterol, diabetes, or smoking.

Similar to the IMPaCT study, the participants were randomly placed into one of two groups. Participants in one group received standard management of risk factors in consultation with a primary care provider assigned through the study, and in the other, the same primary care management plus a patient-centered self-care intervention called HeartHealth. In that program, CHWs trained by the University of Kentucky’s Kentucky Homeplace help participants overcome barriers to staying healthy.

“We did a lot of advance work with the community,” Moser says, “and we realized that having community health workers be the main recruiters, the main deliverers of the intervention, and the main data collectors would really increase people’s recruitment and retention in our program.”

Ashley Gross, a CHW and one of Moser’s co-investigators, says it helped that she knows almost everyone in the county. “The investigators especially wanted the community health workers to be people from the community who could get out and talk to people easily, which worked out perfectly for me.”

Some of her conversations while recruiting patients were eye-opening. “We didn’t realize how many people had good health insurance coverage but still wouldn’t go to the doctor because they couldn’t afford medicine or their co-pay,” Gross says. “Some of these are people I’ve known my entire life.”

The intervention takes a "whole-health" approach to enrolled individuals by promoting self-care to reduce multiple cardiovascular risk factors at once, rather than focusing on just one, Moser explains. With a patient-centered, culturally appropriate focus, the CHWs teach groups of participants about healthy eating, physical activity, stress reduction, stopping smoking, and other self-care activities.

Moser’s team collects data before the CHW sessions begin, after the 12-week intervention period, and after a year. They are recording such information as patients’ health risk factors, quality of life, and adherence to CVD risk-reduction practices.

The HeartHealth program has used not only CHWs but also patients to help design the intervention and to motivate fellow patients. For example, Moser says, one of these patient champions informed her team that learning in groups would be better than one-on-one coaching, noting that in rural areas, social support is essential.

Another patient-originated idea was to use healthy competition between group members to see who could walk the farthest, lose the most weight, or eat the most healthful diet. Patient champion Jonathan Butler, for example, continually engages other patients by suggesting that they take walks with him or compete using fitness trackers to see who takes the most steps.

The relationship is reciprocal, Butler says: “I try to ask them what they’re doing for their health. If they’ve got good ideas, I do what they do.”