Parents of children with rare genetic disorders, and their doctors, need genetic information to guide care decisions. A redesigned report for providing information to families and clinicians may improve communication and shared decision making.

Even before Mackenzie Clink was born, her mother’s doctors suspected that something was wrong. A routine ultrasound showed that the baby’s brain was enlarged. A month after the birth, Mackenzie’s parents learned that she was missing part of her brain, a portion of the corpus callosum.

As she matured, Mackenzie experienced seizures and showed developmental delays. Her parents, Amy and Russell, took her to many doctors and received various kinds of help. However, they never found out why Mackenzie’s brain had failed to grow normally. Several years ago, the Clinks enrolled in a study at Geisinger Health System, in central Pennsylvania, where they’d been receiving care. That study would sequence Mackenzie’s entire genome in search of an explanation. 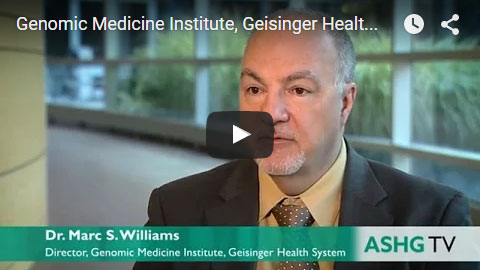 Dr. Williams discusses his project in this clip from a WebsEdgeHealth feature segment. (Video courtesy of Geisinger Health System)

“Whole-genome sequencing is a powerful new tool,” says Marc S. Williams, MD, director of the Genomic Medicine Institute at Geisinger. He’s a pediatric geneticist and the team leader of the whole-genome sequencing study. With whole-genome sequencing, doctors have determined the underlying cause in 20 to 40 percent of children with rare genetic conditions that traditional genetic testing could not diagnose. But Williams’s experience with both kinds of genetic testing made him concerned about the ways that doctors and patients communicate when dealing with rare genetic conditions.

When a disorder is rare, says Williams, parents and doctors alike often scramble to locate information. Because of the rarity of many genetic disorders, physicians may have never before seen a patient with a certain condition.

Many parents comb the Internet, often learning a great deal but not knowing whether the sources are reliable. Currently, parents don’t receive a report directly from the genome sequencing lab.

Also, genetic laboratory reports assume a high level of knowledge that can go over the heads of non-specialist doctors. Therefore, doctors may not share lab reports with patients’ parents or even write them a letter summarizing the findings.

“There has to be a better way,” says Williams. He envisioned comprehensive laboratory reports created in tandem for parents and doctors. Such reports, he predicted, would facilitate open, even-handed communication between doctors and patients’ families. Ultimately, the reports could make families more involved in key decisions, more satisfied with care, and more likely to stick with a treatment plan.

Soon at Geisinger, all patients receiving genomic sequencing—potentially several thousand patients over the next few years—will receive their results via the report form that Williams’s team has developed.

I’m a real believer in going to the end users to get their input to design an effective report. That’s not something our field has done a particularly good job of. So this PCORI-funded project provided an opportunity to practice what I preach.

Williams designed the team’s PCORI-funded genomic reports project with several other physicians and a community-based investigator, Michelle Bonhag. An attorney with a longtime interest in genetics, she helped create a sample version of the patient-facing report, compose questions for use in interviewing parents about the report, and code results. The team recruited Amy Clink and other parents of children with undiagnosed intellectual disability who were part of Williams’ whole-genome sequencing project.

The research team presented nine sets of parents with the sample of a genomic laboratory report intended for parents. The parents answered questions about what features they would like to see, as well as their preferences for language and format.

“They were asking, ‘Is this easy to follow? Are you understanding this?’” says Amy Clink, a public school music teacher and mother of three. “I do remember that it was very easy to read, and it was laid out nicely. The colors helped us to read it.”

Themes soon began to emerge. Parent after parent expressed appreciation for the report’s simple language, logical flow of ideas, and visual appeal. The researchers were surprised that the parents asked for more detailed information about how their child’s condition might change over time, even if that information made the report longer and more difficult to read.

“It was enlightening for us because the families were asking for something that we never would have thought about putting in a report,” says Williams. The researchers next convened two focus groups to address the request for prognosis information and then added this feature to the report. “Really, this is their design,” Williams says.

The provider-facing report was designed in a similar manner. Many doctors find traditional genomic laboratory reports difficult to use. Williams and his colleagues started with a report they’d created for a prior project. They then redesigned it in response to in-depth interviews with a broad range of doctors likely to receive genetic sequencing results. The final report differs from the patient-facing report in its more technical language and in the resources recommended. Like the report for patients, it strives to present information about diseases and genes clearly in a well-organized, easy-to-understand document. The doctors requested access to the patient report as well. “We think this is an early sign that the reports might improve engagement and communication,” says Williams.

Whole-genome sequencing did produce a diagnosis for Mackenzie Clink. She has Pitt-Hopkins syndrome, which results from a very rare mutation. Having a diagnosis hasn’t changed Mackenzie’s day-to-day care, Amy Clink says.  Now nine years old, Mackenzie attends school in a classroom with other children with disabilities. There, she learns how to operate switches to communicate; children with Pitt-Hopkins syndrome do not develop speech. Still, says Amy Clink, “it’s good to know what the problem is. It helps us get a better idea of what her future is going to be.” 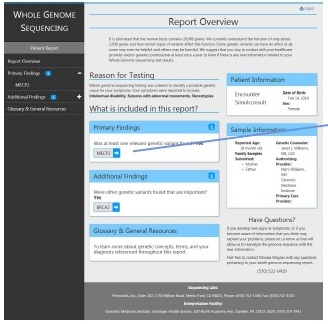 The Patient Facing Report Overview orients patients to the testing and results. (Click the image to view a larger version of the report)

Testing How the New Reports Work

The next phase of the project is a randomized trial in which parents and doctors will use the improved report designs in a real-world clinical setting. Half the 50 or so families will receive a personalized version of the new patient-facing lab report customized with their child’s results, and the doctors will receive the enhanced doctor report, along with access to the patient report.

Two months later, researchers will interview the parents about their reactions to the report. At that point, the new-style reports will be offered to parents who did not receive them earlier. In addition, the larger whole-genome study will record outcomes such as changes in treatment plan and health improvements.

“We hypothesize that the new styles of report will facilitate communication between the family and the doctor, which will improve satisfaction, engagement, and treatment adherence,” says Williams. He adds that the doctors participating in the trial are enthusiastic about the new-style provider reports, and most have asked to receive the patient-facing reports as well.

“The genetics area is exploding so quickly,” says Bonhag. “The best way for this field to open up is with patient involvement.”

If the project is a success, says Williams, he will look for ways to implement the new style of reporting through the electronic health record system at Geisinger and beyond. He has already made presentations about the work at several national meetings, has published one paper, and has another paper on the way.

“I’m a real believer in going to the end users to get their input to design an effective report,” says Williams. “That’s not something our field has done a particularly good job of. So this PCORI-funded project provided an opportunity to practice what I preach.”

Rare Diseases
At a Glance

Goal: To develop and test an advanced, information-rich, and highly readable patient-facing genomic laboratory report, with the aim of improving communication between parents of children with rare genetic disorders and their care providers.