A cold-turkey approach to smoking cessation often doesn’t succeed, but a more gradual tactic might be successful for some high-risk smokers.

Bobby Young began smoking when he was 11. Over the years, he made attempts to quit, but the pull of cigarettes was too strong. A truck driver for 32 years, he has been unable to work since having a heart attack and a stroke in 2010 at age 52. But despite having chronic obstructive lung disease (COPD) and using oxygen at night to assist his breathing, he was still smoking two packs a day.

Young is one of 5 million Americans with COPD who smoke. His story is a familiar one to smoking-cessation researcher Edward Ellerbeck, MD, MPH, of Kansas University Medical Center (KUMC). People with COPD have a particularly high dependence on nicotine and find it extremely difficult to quit smoking, he says.

“Some patients with COPD will smoke even while using oxygen, creating a fire hazard,” he says. “It’s not that they don’t recognize the danger of their habit––they do. Most would like to quit, but very few succeed.”

Standard US smoking-cessation programs typically are only offered to smokers who are ready to quit abruptly. At the time of the quit attempt, they are expected to stop all smoking, and they may be offered a nicotine patch (also known as nicotine replacement therapy, or NRT), which may be supplemented with nicotine gum or lozenges when the participants crave a cigarette––an approach called combination NRT. This standard approach, contends Ellerbeck, doesn’t work for most smokers.

“Quitting cold turkey is too daunting,” he says. Smokers instead want interventions that allow them to quit gradually.

A patient holds a spirometer as she receives instructions for how to complete a test of her breathing. (Courtesy of Tresza Hutcheson, KUMC)

With PCORI support, Ellerbeck is comparing the effectiveness of a gradual approach to that of conventional treatment. In his study, dubbed UKan Breathe, several hundred smokers with COPD, including Young, are being randomly assigned to one of two groups. Those in one group follow current guidelines: 12 weeks of conventional smoking-cessation counseling supplemented with 10 weeks of combination NRT to support a planned quit attempt. Participants in the other group receive extended “guided maintenance therapy”, consisting of a year of combination NRT plus five counseling sessions focused on adhering to treatment and gradually reducing smoking.

In both groups, participants’ smoking is assessed by urine and breath tests when they enter the study and after three months, six months, and one year. “Our hypothesis is that guided maintenance therapy with long-term combination NRT will reduce overall exposure to cigarette smoke, reduce harm related to smoking, and ultimately lead to greater quit rates,” says Ellerbeck.

In previous studies of smokers who did not have COPD, combination NRT for periods ranging from 6 to 18 months doubled quit rates compared with a placebo therapy. Such long-term NRT has not previously been examined in smokers with COPD.

Numerous studies support the safety of using combination NRT while continuing to smoke, says Ellerbeck. Not only are smokers using combination NRT more likely to quit, but they are also more likely to smoke less even if not actively trying to quit. Young, a participant in the guided maintenance therapy group, says that since enrolling in the study, he has cut back from two packs a day to one and a half, and he now smokes only about half of each cigarette. 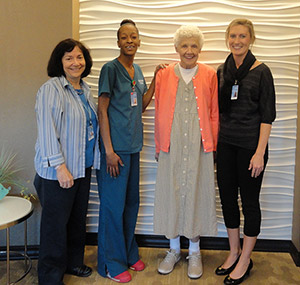 UKan Breathe and CRC staff with a patient. (Courtesy of Tresza Hutcheson, KUMC)

Ellerbeck and his colleagues assembled an advisory panel of smokers with COPD to help design the study. Panel members strongly supported combination NRT, which is the most commonly used US smoking-cessation treatment, as the study intervention.

Advisory panel members’ comments and suggestions helped shape the study in numerous ways, says Tresza Hutcheson, PhD, a smoking-cessation counselor on the research team. For example, because patient partners said they didn’t have much previous experience using nicotine gum or lozenges, participants enrolled in the study are given the opportunity to try samples of different types and flavors at their initial visit.

Some patient partners spoke of past difficulties using nicotine patches (for example, the patches didn’t stay on or caused a rash). So, the researchers had the study participants practice using the patches during the initial counseling session and provided additional health education on all of the nicotine products and basic troubleshooting. The team also set up a toll-free hotline that participants can call to discuss any difficulties.

John Loftiss, 54, a 38-year smoker with COPD and a member of the patient advisory panel, says he suggested that, to encourage adherence to follow-up visits, participants be offered a small payment for each visit. The researchers took this advice: Study participants receive a $50 gift card for each assessment they complete.

The researchers plan to compare smoking quit rates and exposure to cigarette smoke in the two groups after a year, when those in the guided maintenance therapy group are still using NRT. “Most previous studies measured quit rates after participants discontinued NRT,” says Ellerbeck. “We will consider it a success if, when the study concludes, participants have stopped smoking but are still using NRT.”

The lung damage of COPD is irreversible, and smoking speeds the disease’s progression and increases risk of heart attack. “For smokers with COPD, we think reducing exposure to tobacco smoke may be a positive outcome even if they continue to use NRT,” says Ellerbeck.

Young says that he feels better and doesn’t run out of breath as quickly, now that he’s smoking less. He adds, “I hope that, before the study is over, I do quit.”